One hand-crafted rug passes through 180 hands from start to finish, and it’s a testament to craftsmanship in itself. Each one of those 90 people possess unique and irreplaceable skill, as it takes years to harness. To join all these hands together requires a decentralized model, reaching out step by step to each specialist to create quality that is unmatched. This is made possible only through building bridges of compassion, empathy and love.

Although each individual in the process is a unique craftsman, the technical description will easily skip the understanding of one who is not a part of the rug industry. So out of the many processes, there are the main ones highlighted below. 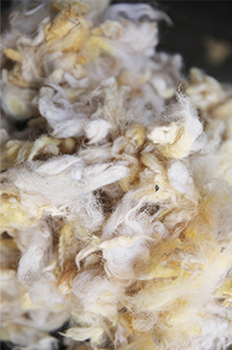 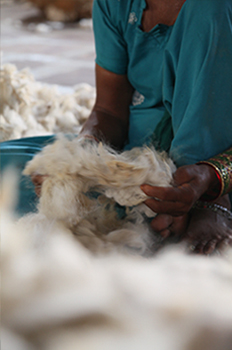 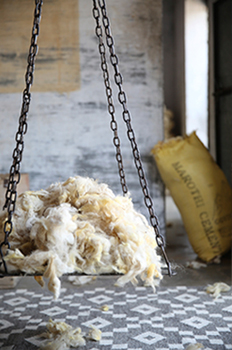 The essence of handcrafting is truly captured when its raw material is also handcrafted art. Wool, purchased at a biannual auction in Bikaner, due to the seasonal shearing of sheep in the spring and in the fall, comes mixed in texture and qualities that are segregated by hand, as the traditional expertise of the local folk is irreplaceable.

Once sorted, segregated and washed, it finds itself in the hands of one of India’s rarest artists, the Katwari (spinner).

She sifts through the wool, layering the strands together, a process called carding. Placing a dollop of wool on a bristled pad, she brushes it with another, removing clumped dirt, knots and giving the wool uniformity, gently caressing it to evolve into yarn.

In the wake of that tedious task, she channels centuries of Indian heritage through her hands, spinning the yarn on a charka (spinning wheel), with a meditative flow that brought back Indian independence, and is a permanent symbol to the nation’s values. The intertwined fibers of wool have a wave-like pattern of thick and thin, but sticks together to make the most durable form of yarn, somewhere in metaphoric representation to its Indian roots. 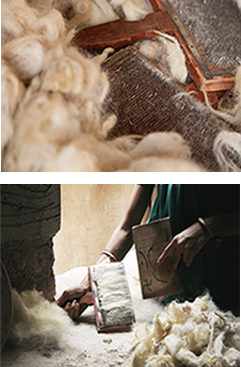 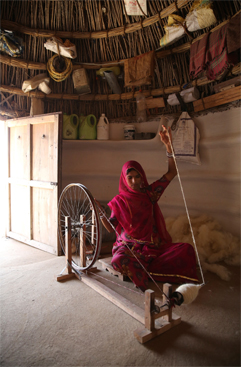 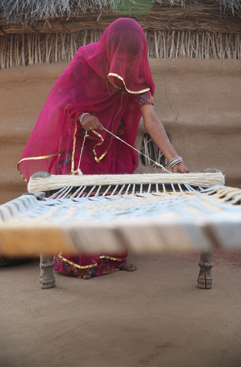 Rug dyeing is a traditional art that allows artisans to create decorative effects. Yarn is first segregated before the dyeing process. Lighter wool for lighter coloured dyes and darker wool for the darker dyes and texture by the feel. The texture is also important because it can determine the overall quality of the yarn. Blends of different wool help moderate how bristly or soft it turns out.

Yarn is wound on a wheel-like frame, and dipped and kept into boiling hot vats of dye to embed its intended colour. Artisans use either natural dyes from plants and mineral compounds or synthetic dyes, but a transition is being made to be less reliant on the synthetic ones and be more eco-friendly. The yarn is then hung to dry in the sun, then stored until use. Each batch of yarn has inherent colour variations, which brings character to the rug, along with wool ageing and raw material preparation. Rugs with this effect easily observed are known as Abrash or Antique. At Jaipur Rugs, we dye yarn to over 3000 colours.

This precious art found its way into Indian heritage through its connection to Persia, found in the name given to the style of knotting; Persian hand-knotting. It’s a process taking a minimum of 2 months, ranging up to almost a year depending on the quality and size of carpet being woven. While the spinner’s flow is meditative, it’s the weaver’s rhythm is entrancing to an onlooker. Weaving has been an escape to many from the perils of the modern world, and has also birthed poetry that can only touch its essence.

Its uniqueness in art is through its style of printing; line by line with such intricate detail that would leave experienced artists in confusion. Differentiating each knot was originally done by memory, where weavers would sing out the colours of the line of knots. To accommodate for the changing design palate, carpets are now woven by the help of maps, while more experienced weavers have started bringing out their art in the form of a unique carpet.

The weaver was considered an untouchable in the India of the past. A definition that was misinterpreted, truly fitting only to their skill. 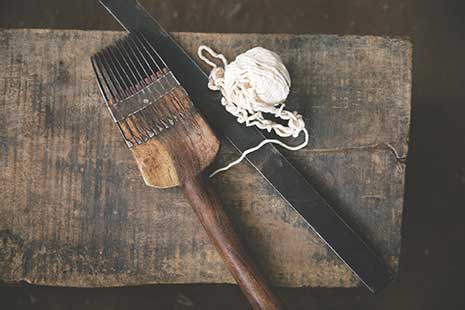 There are 18 finishing steps to a carpet. When all these steps are done by hand, it can take up to a month to glisten in perfection.

Gul tarash, on the complicated end of the spectrum, translates to finding the flower. It was originally a technique of its namesake on traditional carpets, where craftsmen would create a high-low effect that makes the flower patterns pop out. On modern designs it is used to highlight motifs or patterns, but also create a textural effect. This is done by the use of special scissors and the craftsman would etch out the pattern, being very particular in cutting out only the strands of yarn that need cutting. The focus puts you in a daze, but its outcome is soothing to the eyes.

One step that can be easy to associate with is washing. It may sound simple, but there’s a reason carpets aren’t washed in every home. Each carpet isn’t washed, but rather bathed and groomed. Washers methodically pour water and mild cleansing solution and then use the inherent properties of water to pull out the dirt and specks that every carpet has an affinity to hold on to. Each stroke flushes out what is unnecessary and at the same time increases the strength of the underlying knots. The technique is so effective, it uses a prescribed minimum amount of water and is done in 15 minutes!

The completed rugs are evened out, trimmed and prepared for export 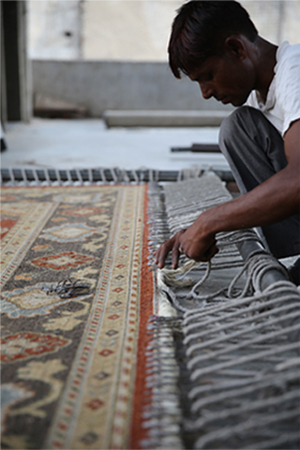 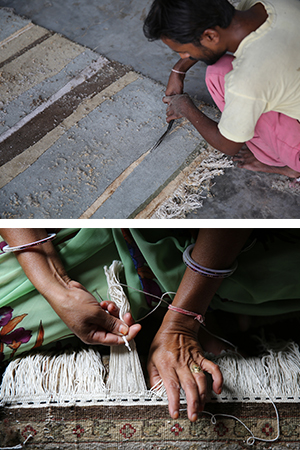 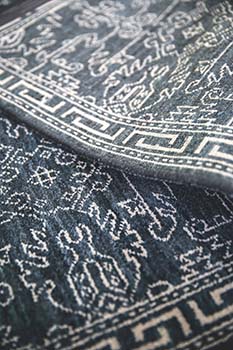 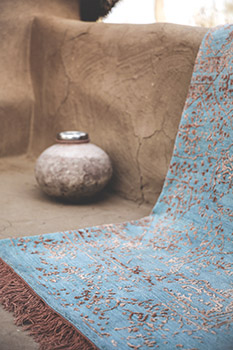 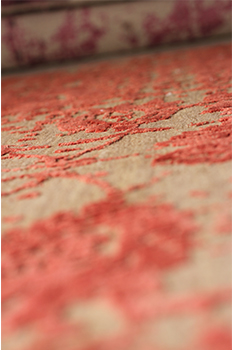 The second factor in determining the quality of rugs, specifically hand-knotted, is in knots per square inch.

Each knot is in comparison to a pixel; the more pixels in a given area, the clearer the image. It applies to rugs as well. More knots compressed into a square inch not just increase the intricacy and clarity of the design, it increases the durability of the rug as the knots are closely packed.

To accommodate for more knots, finer material may also be used like silk or thinner yarn, which increase the quality of the rug by the material used to create it. Higher kpsi also means more time on the loom, ranging from 5 to 12 months to completion. 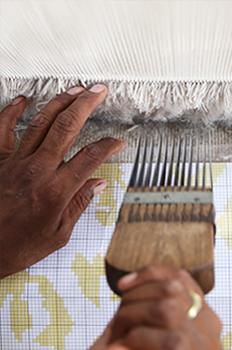 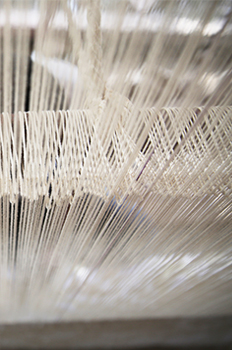 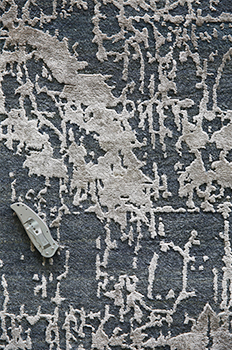 How do you measure it ?


Turn a hand-knotted rug over and count the individual knots you can see running vertically for 1’’ and then horizontally for 1’’. Multiplying these two figures together will give you the overall KPSI. 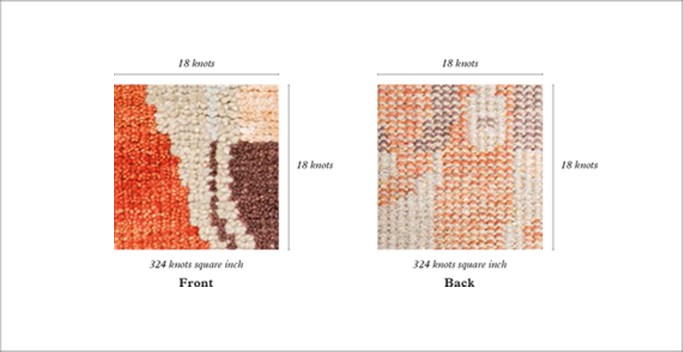 The pile of a rug refers to the way the fibres are finished. These are either trimmed or untrimmed (or sometimes a combination of the two) to produce the required designs in a rug. 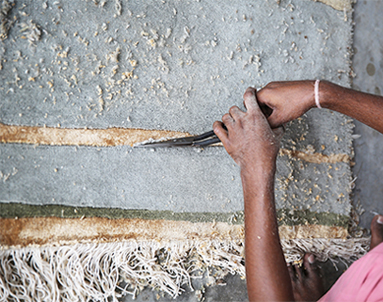 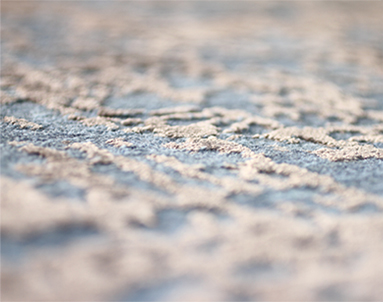 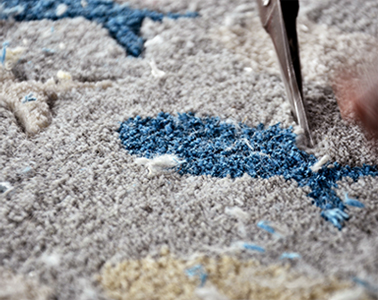 The loops of fibre that make up the rug are left uncut. The lengths of these may vary from design to design.

The loops of fibre are cut, creating a pile on the surface of the rug.

These rugs have interwoven, rather than knotted or tufted fibres, so they have a flat finish instead of a pile.

Not all handmade rugs are woven in the same way. The style of weaving determines both the appearance of the finished product, as well as the price (due to the time and labour involved).

Weaving Techniques at a Glance 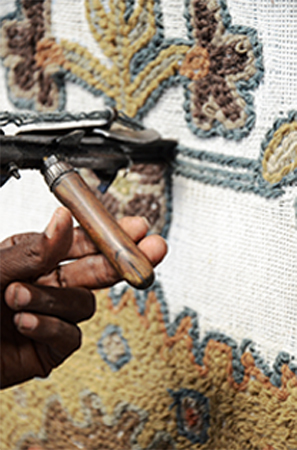 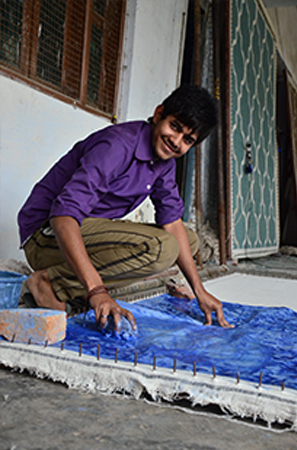 
With their woven construction, these rugs are flat and don’t have a pile.


Hand-loomed rugs usually have a low to medium pile (other than shags, which have a deep pile) and can have a canvas backing added to them.