Nothing quite matches but everything fits in Caroline Weller’s airy family abode in India — including a giant unfinished mural. 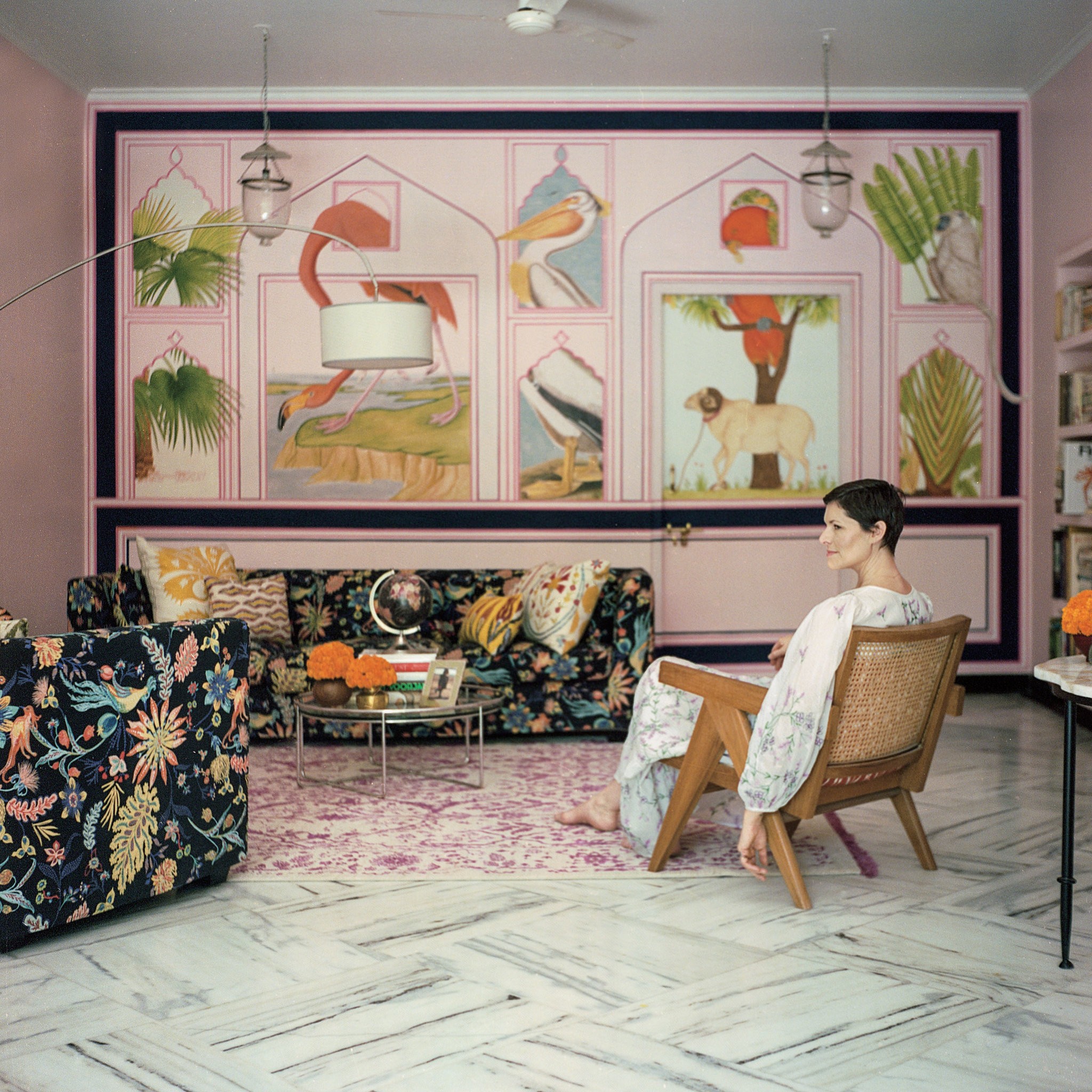 "Caroline Weller, the designer of the clothing line Banjanan, in the living room of her Jaipur home. The mural references moments from her family’s life and travels." - Anu Kumar

A BLUE-FACED, faintly hung-over monkey perches near the ceiling of the British-born designer Caroline Weller’s living room in Jaipur, in the north Indian desert state of Rajasthan. Of no precise species (the pout suggests macaque, the tail langur), he appears in a trompe l’oeil tracery of faux windows in a 16-foot-long and 10-foot-high mural — the first sight to greet visitors walking into the flat-roofed contemporary house built in accordance with the Hindu principles of Vastu Shastra, which strives for an alignment with the natural elements. The primate overlooks a room painted flamingo pink, pinker even than the terra-cotta ramparts that encircle the old city a few miles from this quiet residential enclave.

Note that the monkey is not merely decorative. His presence is documentary: Weller’s family has been stalked by macaques ever since they came to live in Jaipur a decade ago from New York City (via Bangalore). The animals roam the streets at will, uprooting plants from pots, leaving trails of dirty handprints and peering through windows. Once, a macaque leapt on Weller’s partner, the fashion photographer Neil Davenport, and tried to bite his ankle.

And yet: Could the monkey also be a stand-in for Weller herself, an arch observer and wanderer? The mural is both a backdrop for her life as an expatriate in India and an analogue to it, suggesting an openness to happy accidents as well as an ability to pragmatically maneuver around obstacles and limitations. Like the magic-realist prints, gossamer cotton clothes and table linens that Weller designs for her five-year-old fashion and home line, Banjanan (sold at Saks Fifth Avenue and through Moda Operandi), created in local family-run workshops specializing in centuries-old Rajasthani block-printing and embroidery techniques, the painted wall and the house it defines draw from tradition without being beholden to it. 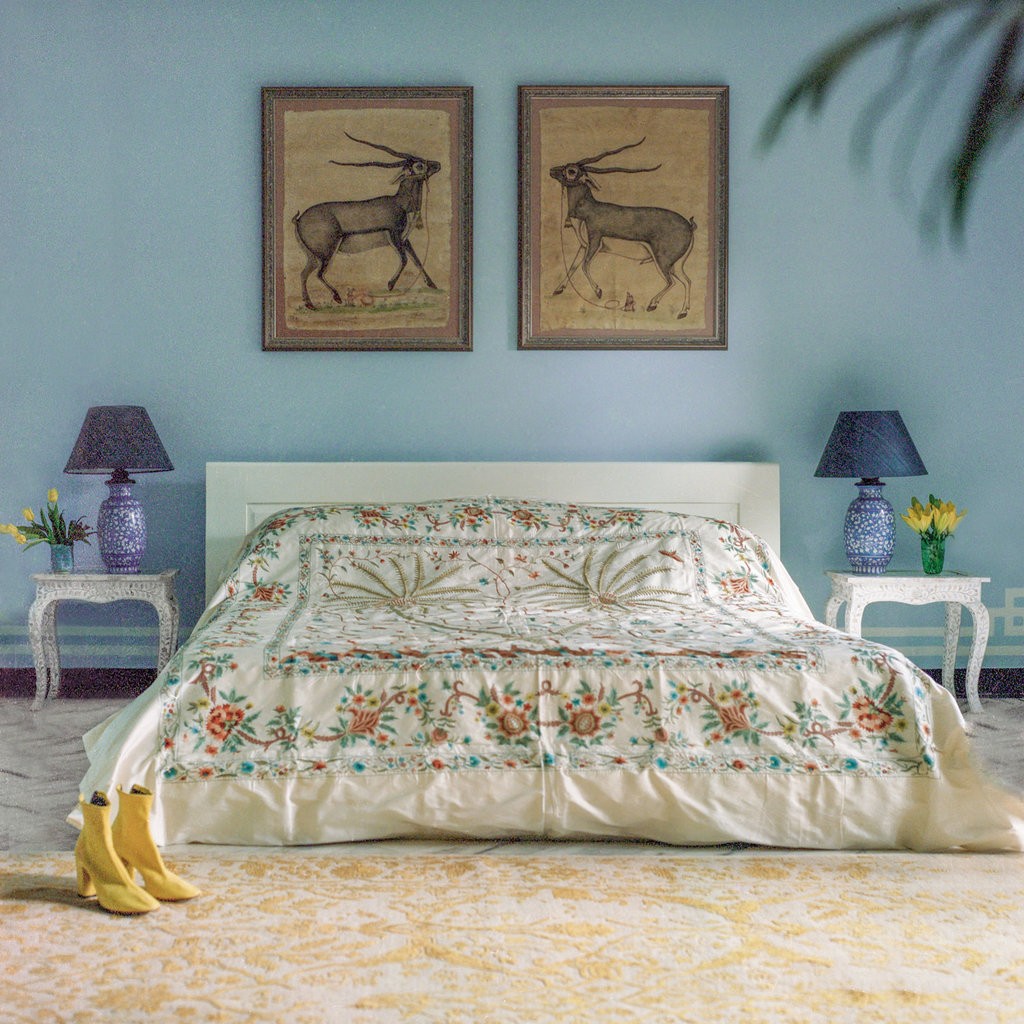 WELLER, 46, GREW up outside of London, the daughter of a doctor and a banker, camping out in the hollows of her mother’s rhododendron bushes and communing with her imaginary penguin friend. While studying fashion at university in the early 1990s, she veered from the expected path, going to India for an internship at Anokhi, a Jaipur-based textile company dedicated to reviving the then-languishing block-printing industry. After graduating, she made her way to New York, designing at J. Crew, Club Monaco and Calvin Klein before landing at Armani Exchange. But corporate fashion made her restless. So it seemed like serendipity when, in 2008, she got a job as a creative director of a new lifestyle company in India. With Davenport and their son, Gil, then 18 months old, she moved to Bangalore only to witness the global economy disintegrate and, with it, funding for the nascent brand.

Rather than slink back to New York, though, the family headed to Jaipur, to which Weller still felt a strong connection from 15 years before. They didn’t have a plan — “only a plan for adventure,” she says — but she quickly found work consulting for former colleagues in New York on projects involving Rajasthani crafts, as well as an airy 2,500-square-foot house located next to a nature preserve. (Weller goes for runs there, alongside the yogic breathers, the sari-and-sneaker power-walking women and the occasional leopard who also populate the park.)

Foot-long lizards bask in the house’s front yard, which, depending on the season, may be shadowed by blossoming champa trees or towering stalks of heavy-headed dahlias. Peacocks case the premises; mosquitoes go rat-a-tat at elbows. The spirit of the outdoors has crept inside: The living-room sofa and easy chair are clad in Weller’s Black Garden pattern — a swirl of tousle-tailed birds and flowers so vivid they seem to pulse against the dark linen upholstery. 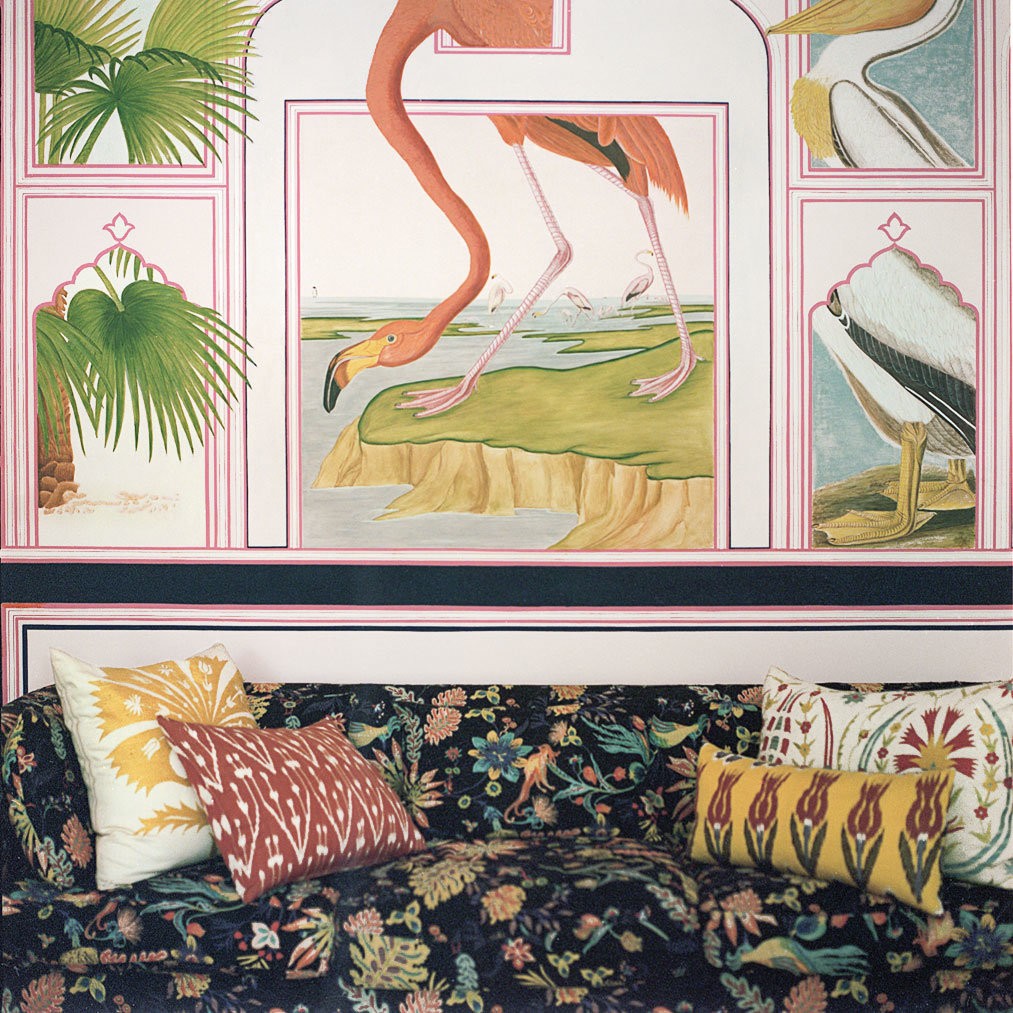 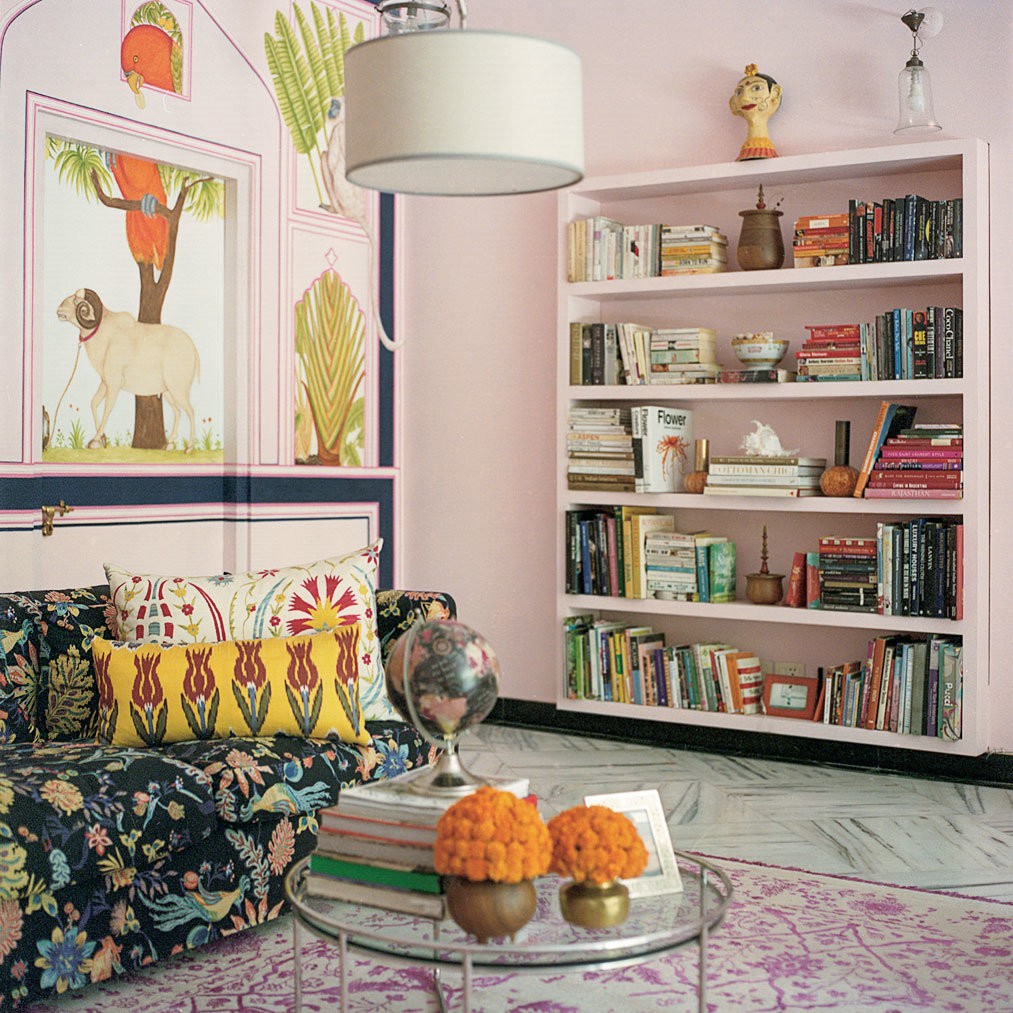 "The carpet bears a flower pattern that is intentionally faded in spots." - Anu Kumar

Here (much as in nature), nothing exactly matches, but everything fits: a Kashmiri silk bedspread embroidered with butterflies, a dresser inlaid with camel bone, lamps jerry-built from vases, chairs found decades ago at the Chelsea flea market in New York, their cracked Lucite seats replaced with weather-hardy rattan. Traditional chicks, blinds of woven bamboo, help battle the heat.

The kitchen, once a near-empty shell, is now briskly functional, equipped with a stove top fueled by a gas canister and a reverse-osmosis filter through which drinking water is piped into an enormous clay pot called a matka. From every air conditioning unit, tubes run down to little pitchers — the runoff is used for watering plants and mopping floors. Weller strives for similar sustainability with Banjanan, transforming scraps and surplus into limited-edition pajamas and patchwork quilts.

Allowance for error and imperfection is woven into the spirit of her line. Through Banjanan — the name is a tribute to Rajasthan’s nomadic Banjara tribes — Weller has discovered that no two block-printed textiles can be the same. Every design is set using multiple blocks, with one color and outline per block, each carved out of teak and cured in mustard oil for two weeks, then dipped into a tray of dye and pressed to the cloth, with a swift knock on top to make sure the image takes hold. The fabric is pinned to 16-foot tables that the printers slowly work their way down, tapping block after block. Sometimes the patterns don’t align or the dyes fail to dry and bloom beyond their borders (no printing is done during the monsoon for that reason). It’s the tiny flaws, and the sense of a human hand, that give them depth. 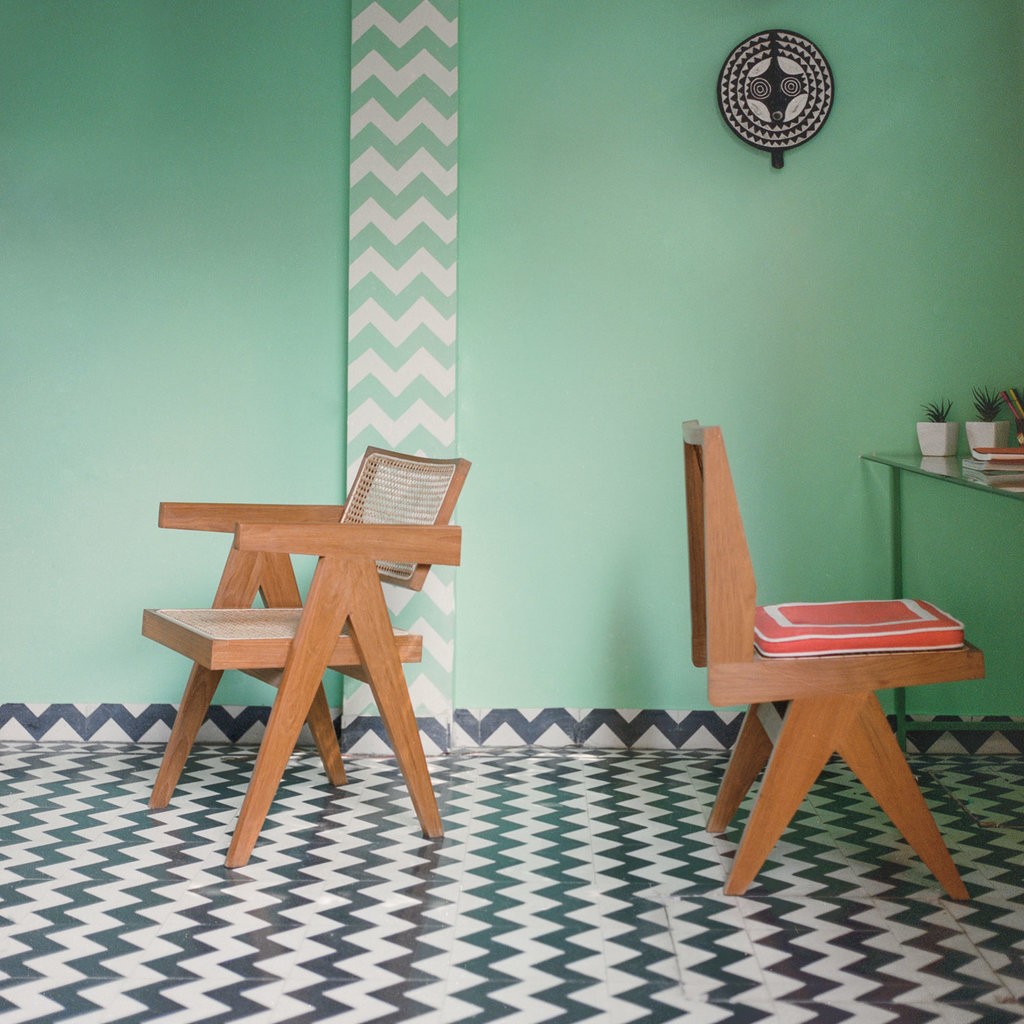 "Reproductions of chairs designed by Pierre Jeanneret for Chandigarh, the planned city in northern India that he and his cousin, Le Corbusier, helped build in the 1950s." - Anu Kumar

That same play of disparate elements in surprising harmony is apparent throughout the house. In the living room, a carpet by Jaipur Rugs presents a modern take on traditional village patterns, with fuchsia flowers that seem to trail off in places for a weathered effect. In a sunroom with pistachio walls and a chevron-tiled floor sit teak armchairs, reproductions handmade to order by a Bangalore company called Phantom Hands; the originals were designed in the 1950s by Pierre Jeanneret, the cousin and collaborator of the Swiss-French architect and urban planner Le Corbusier, for offices and public spaces in Chandigarh, the north Indian city the two men helped build from scratch.

Jeanneret was Le Corbusier’s man on the ground: He lived in India for years and came to understand the environment and people’s daily lives. Weller respects his commitment to place. She’s slightly uneasy when Western fashion executives, wanting to use Rajasthani crafts, swoop in for a few nights, all the while talking about “saving” and “empowering” local artisans, as if their companies weren’t also benefiting from the exchange. Weller feels a bond to the patternmakers, color specialists, tailors, embroiderers and block printers she collaborates with, almost all of whom live within a few miles of the Banjanan studio. But she recognizes that, at the end of the day, there’s a transaction. “They do good work, and I pay them for it,” she said. 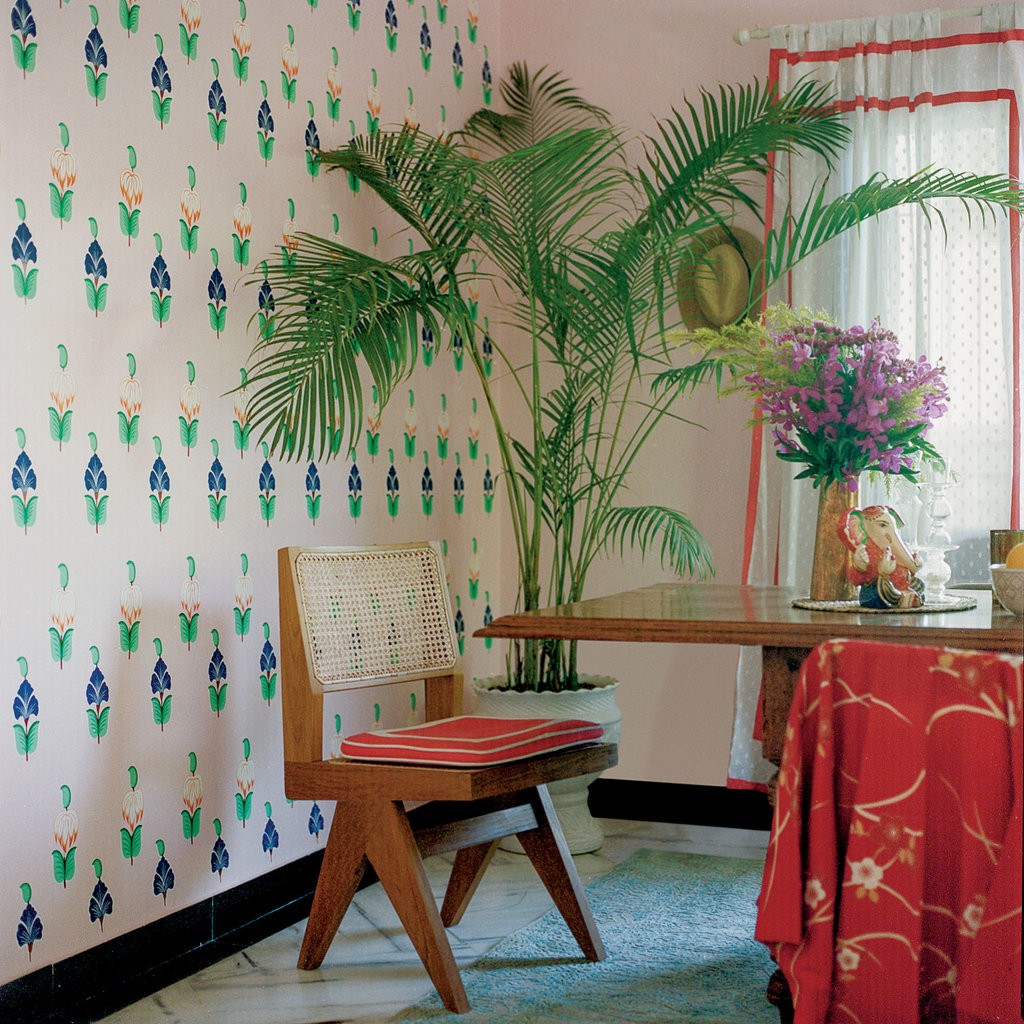 "In the dining room, an artisan painted one of the walls with irises and lilies, inspired by a room at the City Palace in Udaipur." - Anu Kumar

Like her relationship to her adopted home, her relationship to color, pattern and narrative is ever-evolving; over the years, the house has gone through several coats of paint, or “states of mind,” as Weller puts it. Engineering the living-room mural last November proved a somewhat unpredictable affair: The miniaturist whom she hired was initially flummoxed to be working on a grand scale. (“He was very good with eyes,” she says.) He finished in February, then returned in April to work on the smaller adjacent dining room, where he detailed a pink wall of irises and lilies inspired by the City Palace in Udaipur.

And though it may look complete, the mural in the living room is only theoretically finished. Near its center, a pelican sighted on a family trip to Senegal stands shoulder to shoulder with a flamingo out of a 19th-century John James Audubon illustration. Weller floated the idea of including a penguin, in a nod to her childhood companion. Davenport and Gil were firmly opposed; it didn’t make sense, they said. She conceded, and then one day she came home from her studio and found the penguin painted in, so small you could easily miss it, on a minuscule ice floe: an unexpected gift. They were right. It didn’t make sense, and that was beautiful.