In India, one man’s idea to double salaries and let artisans work from home has created a positive ripple effect across five states. 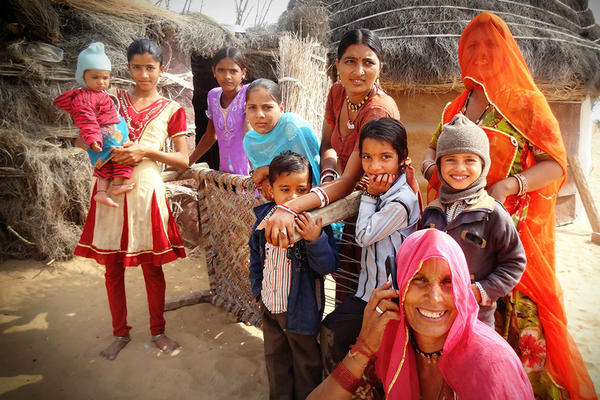 Chhote Lal and Kanni Devi are perched behind a loom, weaving rugs in the courtyard of their two-room home in Nareth, Rajasthan, a rural village on the outskirts of Jaipur, India.

Devi has a wide, captivating smile accentuated by Red lipstick, a new luxury in her life.

Lal, 40, and Devi, 35, have been weaving for Jaipur Rugs, India’s largest rug manufacturer, for more than 15 years. In 2013, they were selected as one of India’s best artisans by The Times of India. They were flown to Delhi, a first for the couple, and recognized for their skills. Devi points to a laminated copy of the article, which hangs in their living quarters. The title reads, “Carpet Weaver to Master Artisan.”

Lal is the son of a shoemaker. He learned rug weaving as a young man, earning 50 rupees, or ,1, per day. Devi says she was worried when they married: “How could he take care of me with such little money?”

Lal used to work for rug contractors, middlemen who employed weavers to produce carpets for exporters. In 1998, he was introduced to a man named Nand Kishore Chaudhary, the founder of Jaipur Rugs. Chaudhary had a different business model: Pay weavers almost twice what they were making, enable them to work from home, and provide them all the materials they need.

Chaudhary, a tall, discerning figure, is revered by his employees. His business philosophy is rooted in the villages of India, not in the rise of congested urban factories, and he believes weavers who work from home—with access to their children and families—are happier and more productive.

In 1978, a then-25-year-old Chaudhary borrowed ,200 from his father to purchase two looms and an old bicycle to start his rug business. He set up the looms in his home and started learning the art of weaving from nine trained but unemployed villagers.

“I discovered that some of the most beautiful rugs in the world were made by those who did not have the most basic rights in society,” he recalled, speaking in Hindi.

He was recently married at the time, and his wife, Sulochana, supported his new venture despite pushback from their families. She cooked, fed, and took care of the weavers, who often slept and ate at their home.

Two years later, they moved from Rajasthan to the neighboring state of Gujarat to work with tribal communities, teaching them how to weave. Tribal communities in India have long been resistant to development and particularly to outsiders, Chaudhary says. For three years, he worked to transform that mistrust—and eight years later, he had built a network of 15,000 tribal artisan families in the state.

That network has scaled exponentially since. Today the company relies on more than 28,000 artisans across five states in India who produce rugs that are sold in more than 40 countries. Some are simple doormats; others are intricate works of art in silk, priced at ,10,000 each. Knot quality determines price and prestige: The finer and tighter the knots, the higher the value.

There are 82 processes in carpet making, Chaudhary says, from buying the raw materials to final delivery. Jaipur Rugs monitors each one, sending an inspector every two weeks to the villages to track progress. Quality control, he acknowledges, is the hardest part. In 2009, the company was throwing out ,10,000 worth of product because of defects and loose knots.

It eliminated waste by setting up more checkpoints at the village level and then in the warehouse. Completed rugs were delivered to the Jaipur offices for inspection. Color-coordinated digital blueprints were designed, printed, and sent to villagers to create consistency. Colors also made it easy for villagers, who were illiterate; they simply had to match thread colors to the pattern.

The grassroots–to–global supply chain has solicited interest from academics, most notably the University of Michigan Professor CK Prahalad. Prahalad, who died in 2010, studied companies attempting to meet the bottom line while encouraging social good in their communities.

When Prahalad called him to do a case study on Jaipur Rugs, Chaudhary was surprised. Prahalad introduced himself on the phone, and Chaudhary said, “I know who you are.”

Chaudhary is wary of attention. He is at ease in the village where he began and hopes to return when he retires. He jokes, “I don’t do well in a tie and a suit.” He spends his weekends outside the chaotic streets of Jaipur, hiking, camping, and exploring Rajasthan’s crumbling forts and palaces, relics of an era of royalty, luxury, and art.

On the way to a village inspection, he directs the driver to make an impromptu stop at the remains of an old palace with al fresco paintings: “I heard there was a haweli palace here. I haven’t seen it. I hope you don’t mind.”

He hops out of the car at a farmers market. Vendors sitting behind jute bags overflowing with red chiles pause as the car leaves and squeezes through the busy street. Chaudhary hardly notices. He navigates the narrow alleys with alacrity, asking locals for directions. His daughter Kavita, responsible for the design elements of Jaipur Rugs, is close behind him. She apologizes for the stop: “My dad is very childlike, as you can tell.”

Despite his grand visions, Chaudhary is a realist. He believes the real lessons of business (and life) are learned in practice, not in the classroom.

“Knowledge gained without practice is ego,” he says.

In 1999, when Chaudhary set up Jaipur Rugs as a private company under his name, he had to hire a managerial team. He opted for well-educated, experienced candidates. That, he says, resulted in a period of tumult. Chaudhary, a man of the villages, was at odds with city-bred professionals who carried degrees from illustrious business schools around the world but had little understanding of the weavers’ lives.

To give them perspective and to “break the ego,” he says, he set up a unique program: the Higher School of Unlearning. He partnered professionals with older, less-educated managers who were entrenched in the business.

“You have to appreciate the wisdom that people at grassroots level have. They’re probably the best managers in the world,” he says.

Next year, Chaudhary wants to restructure the company again, giving the artisans more rights and making them stakeholders. In addition, he is developing a method to connect customers directly to the artisan.

Asha, his eldest daughter, handles the U.S. arm of the company. Based in Atlanta, it sells to high-end boutiques and home decor chains such as Cost Plus, World Market, Pier 1 Imports, and Home Goods. More than two-thirds of Jaipur Rugs’ international sales come from the U.S., the company’s largest market, and it’s becoming increasingly interested in the ethos behind products.

Millennials, Asha says, are much more drawn to brands with a social impact. “I have seen they care more about how things are made and the story behind the product,” she says.

Jaipur Rugs employs four of the five Chaudhary children. Asha is the CEO of the company; her younger sister Archana is the director of quality assurance and also based in Atlanta. Kavita runs the design team out of Jaipur but often travels for inspiration, and Yogesh, the elder brother, serves as the company’s director.

Extended family members also factor into the mix. Chaudhary’s brother-in-law Navrathan Saraf runs Bhoomika Wool from Bikaner, a city known for the largest wool auction in Asia and responsible for 40 percent of India’s wool. Much of the wool is washed, carded, and spun in the villages around Bikaner before being transported to Jaipur Rugs’ warehouse and dispersed to weavers across the country.

Although the company continues to grow—revenues topped ,30 million in 2013—Yogesh says it goes beyond just making money. “It’s hard enough to scale a business with one bottom line to focus on. Growing while simultaneously creating social value is a tall order,” he says.

But Jaipur Rugs classifies itself as a social business. In 2004, Chaudhary set up a foundation to formalize the efforts of the company. In 2008, he learned the term "CSR" (corporate social responsibility). “Too late?” he jokes.

The foundation is another arm of the business, providing the families of the artisans access to education and health care through literacy and medical camps. It also facilitates the process for weavers to acquire an artisan card; in India the status comes with benefits such as subsidized medical care.

“Many don’t know how to navigate the paperwork, or they can’t read and write. So, we fill in,” Chaudhary says.

Lal and Devi proudly display their artisan cards. The two have health insurance, their children go to school, and they’ve upgraded their home from a one-room mud-caked structure to a two-room brick house. Between them, they earn up to 15,000 rupees (,300) a month. And Devi is loving her new lipstick.

Asked if they have aspirations to move to Jaipur, away from the village, they reply, “Why?”