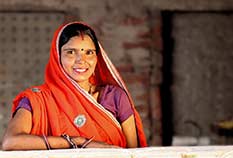 Weaver Designer Rekha, belongs to a small village in Rajasthan, Takarda. Despite of not having a formal education she can read in Hindi today; all thanks to her husband’s support who is a daily wage earner. Her husband works far off from home, so she spends her days weaving, gardening and taking care of her 3 year old daughter while she is expecting another child soon. Rekha believes of all the things, rug making taught her, multi-tasking and time management are the best ones.

Weaver Designer Rekha has decorated this rug with the elements of traditional Rajasthani art like the evergreen designs of lehariya, intricate janzeera designs that is highlighting the border and a splash of colors in the center of the rug. She recalls how she started making the rug in summers and now, the winters are here. Hence, one can see the seasons change on the rug too, with some flowers on the rug blooming and other falling down!

Her life, however, is waiting for a new bud to join the family stem. Yes, this rug also witnessed Rekha preparing to become a mother again. Rekha hopes it’s a girl and she wants to name her “Saraswati” (The Goddess of wisdom) which is also what she named the rug.