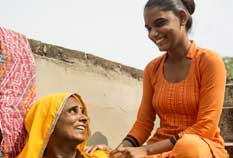 Aarti (25), Mintu (20) and Kamli (45) are three weavers hailing from Kala Ka Bass, Rajasthan. Mintu is Aarti’s sister-in-law while Kamli is their neighbour. It has been a long period of 30 years since Kamli was introduced to the art of weaving. While Aarti and Mintu are fairly new to it with an experience of six and three years respectively. Their rug symbolises how maturity and learning can go hand in hand to weave a complex design with a soft texture. Recently, Arti gave birth to a baby and is still figuring out the right name for him while Mintu is studying. Hence, the rug is a perfect blend of three different flavours including rawness, experience and motherhood weaved knot by knot into a Manchaha.

Makhan‘Makhan’ which translates to butter is how the three weavers describe their rug. It is called so because when the yarn arrived, it was extremely soft just like a baby’s skin. Moreover, when Aarti tries to feed her child with various things he rejects them as he only loves butter. While weaving, they used to play with the child and tried to portray his gestures through this Manchaha. At one corner, Kamli depicted those incidents with the help of traditional designs using the soft yarn. Mintu tried to showcase the baby's gestures, the way he throws things here and there, through scattered pixels. In addition to that, Aarti has woven what she learnt from her mother. The rug is called so because of the ease that the child brought to them in weaving such a complex design.