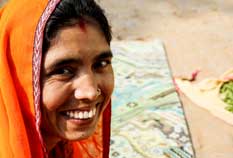 Meena from Dhanota, Rajasthan is a very young weaver at only 22 years old but if this, her first Artisan Original rug, has anything to say, her experience goes beyond age. A married mother of an infant now, but as a younger girl she learned weaving from her own mother. However, she wasn’t inspired to do so until she saw her neighbor earn money for herself and now she hopes to not only help her family but is motivated to design and knot more Artisan Original rugs.

Meena took the natural landscapes she’s often heard of and seen, but never in person, as her biggest inspiration for her rug Nadi Pahad. She started with a colorful chain pattern, changing the shades every now and then to keep the elements slightly different from each other. Nadi Pahad literally translates to rivers and mountains and there’s an abundance of them in Meena ’s rug. The rivers she remembers are represented by the flowing green-blue sections covering the rug partially from top to bottom. The frilled and uneven borders she’s surrounded her mountains and rivers with, are influenced by the patterns she’s seen on the clothing of people she’s around in her village. The rug highlights Meena ’s imagination and even has small very detailed elements she’s fond of such as butterflies, flowers, and leaves perfectly shaped to mimic their real counterparts.