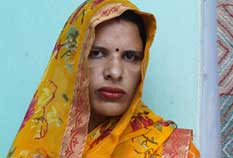 Santosh is a 28 years-old weaver from Narhet, Rajasthan. She has been weaving for the last decade, ever since she got married. Her weaving was initially a means to supporting her husband as he continued his studies. She is a confident, hard-working, and courageous woman who readily takes on responsibilities with a smile. She is the daughter of weavers as well as has two daughters and one boy. She says that her first Manchaha allowed her to practice the virtues that she thought she lacked because she couldn’t pursue higher education- thinking, creating and designing, all by herself. She was able to express what she wanted.

Rangbhari BelThe design of mehendi is called ‘bel’, a typically brown paste made from the Henna plant which leaves a deep red imprint on the skin and when it fades, leaves a lovely orange hue. The rug, therefore, features designs and patterns of bel in different complementing colours. The inspiration for the design came from her daughter who wanted a bel of different colours to be applied. However, since it’s not possible to make bel in different colours, she wove them into her Manchaha. Hence, the rug is named ‘Rangbhari Bel’, meaning ‘colourful bel’. Santosh has also played with the traditional leheriya designs in her own way which adds further dimension to the rug. Her design process included her weaving during the day and thinking at night, losing herself to the process of weaving her first ever Manchaha.